Yelena Belova (Russian: Елена Белова), also known as Crimson Widow, is an agent of Hydra trained to be their own evil Black Widow, and Natasha Romanoff's arch-nemesis. She is a supporting antagonist of Season 3: Ultron Revolution, Season 4: Secret Wars, and Season 5: Black Panther's Quest.

Yelena was trained by the Red Room to be Hydra's very own Black Widow. She worked for Baron Strucker to help him capture the Hulk. However, Yelena's true mission was to take over Hydra and replace Black Widow. She secretly turned her fellow Red Room trainees into her Widow Soldiers using the Winter Soldier technology, but she was defeated by the real Black Widow.

Yelena is in peak athletic condition. She also has extensive military, martial arts, and espionage training. 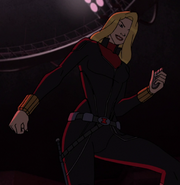 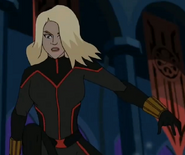 Florence Pugh portrays the character in the Marvel Cinematic Universe film Black Widow and will reprise her role in the upcoming miniseries Hawkeye.