Marvel's Avengers Assemble Wiki
Register
Don't have an account?
Sign In
Advertisement
in: Villains, A to Z, Characters,
and 7 more

And there came a day, unlike any other, when Earth's mightiest heroes found themselves powerless against a threat too formidable for them to comprehend. On that day, Thanos declared himself supreme ruler of the universe.

Thanos was a member of an alien race of warriors called the Titans. He slaughtered most of his people in his search for conquest.

Alliance with the Red Skull

After the battle with the Cabal, the Red Skull went through a portal and arrived to Thanos' lair, where he gave the Mad Titan the Tesseract and stated "As you desire, Thanos."

The Red Skull later stole from Thanos the Infinity Stone and headed back to Earth. Thanos' droids followed him and caught the attention of the Avengers, who found the Skull and took the Stone from him.

Thanos arrived to Earth when the Avengers were looking for Arsenal in Russia. Thanos' ship was destroyed by the Avengers and the robot, who had contained the Stone, but Thanos survived.

In order to confront the Avengers, Thanos attacked the Watcher and the Moon and sent him to the Avengers Tower as an "invitation" for the team. Once the Avengers arrived to the Moon, Thanos offered them to spare their planet if they gave him the Infinity Stone and the Red Skull. Once the Avengers refused Thanos' offer, he engaged them in combat.

Using the Watcher's technology, Iron Man managed to put together a focuser for Arsenal's Stone-powered ray, and successfully hurt Thanos. However, Thanos possessed the Infinity Gauntlet, a device that could draw the Infinity Stone from Arsenal to him. The Mad Titan then set out to destroy the Earth, in revenge for the Avengers opposing him.

By releasing the blast from a nuclear explosion it had previously absorbed, Arsenal was able to blast Thanos "half way across the universe" and destroy the Infinity Stone.

As the Avengers were fighting against Dormammu for the Infinity Stones, Black Widow used them to banish the demon back to where it belonged. After Black Widow managed to refrain from acquiring their full power and stripped herself from them, Thanos arrived, revealing to possess the intact Power Gem, and got hold of them, forming the Infinity Gauntlet.

Using the Gauntlet, Thanos creates a citadel near Earth's orbit. The Avengers attempt to stop him, but the Mad Titan ignores them as he used the Gauntlet to modify Earth's climate, causing earthquakes, ice ages, and other anomalies around the globe. As part of a contingency plan, the Avengers needed to get the readings of each stone individually. By attacking Thanos' ego, they get him to use each stone alone to fight them. He first aged the Avengers until they died with the Time Stone, but Thor forced him to reverse time after causing the Titan's energy beam to backfire, aging him. After bringing them back, he used the Mind Gem to fuel them with anger and make them fight each other, however, Hulk managed to get them to focus their rage and attack Thanos, for which the Titan decided to stop its influence over them. Using the Space Gem, he attacked each Avenger by teleporting immediately after striking. Even after Hawkeye and Black Widow found the pattern of his attacks in order to avoid them, Thanos used the Reality Gem and incapacitated the Avengers, by making them see a reality where global peace was achieved. Captain America managed to see through this lie and freed the Avengers from its influence. Once the Avengers stroke back, Thanos used the Power Stone to fight them.

After the Avengers restrained him, Thanos decided to stop following their game, and reactivated all of the Gauntlet's power at once. He used the Gauntlet to destroy Iron Man, but it was revealed the armor was being controlled remotely, and Stark was in the Avengers Tower, using the readings of each individual stone to put Arsenal back online. Thanos brought Stark's lab to his citadel, but he rebooted Arsenal, who proceeded to fight Thanos. Arsenal absorbed any attack from Thanos, and finally took the Gauntlet from him. Using the Gauntlet, Arsenal brought Thanos and the Avengers back to Earth, where the team proceeded to defeat the Mad Titan.

Thanos was later handed over to the Guardians of the Galaxy.

In New Frontiers, it was revealed that Thanos's generals, known as the Black Order, freed him.

Thanos was seen absorbing an energy known as the Quantum Force, the Black Order distract the Avengers as Thanos charged himself with the energy. After he charged himself he became much bigger and with yellow glow on his body and eyes and he says that they have defeated him in the past and he was going to spare the earth but he was going to conquer the universe. After the defeat of the Black Order Thanos destroyed the planet and was going to destroy the Earth.

Thanos reached the Earth's moon and was looking for the planet. The Black Order appeared distracting the Avengers once more after a fight Thanos find the earth and go to the atmosphere, then he overwhelms all Avengers however people said that they were Avengers too (which was to resist Thanos) the Avengers defeat the Black Order again and the satellite fired a powerful laser that defeated Thanos.

It was mentioned that it was going to take centuries for Thanos to heal himself.

Thanos is an utter megalomaniac, the only thing he respects is power and craved nothing more than the subjugation of the entire universe. Besides a narcissistic need to be invincible Thanos is one of the most feared beings in the galaxy, Red Skull was in obvious terror in his presence and even at a different planet his cruelty was known and reviled, he can at times be somewhat merciful such was shown when he was captured by the Avengers during his pursuit for the Power Stone and bargained he would spare the Earth if they handed over the Red Skull and the Stone but he is also ruthless, tyrannical and sadistic. In his quest for power Thanos nearly killed all of his race, was perfectly happy destroying the Earth to prove the Infinity Stone's might and almost destroyed a populated planet to get even more power.

After finally collecting the entire Infinity Stones, Thanos became even more cruel and egotistical. He came close to destroying the entire Earth by changing it's climate but then engaged in a duel with the Avengers by them damaging his ego. Finally the Mad Titan was defeated and delivered to the Guardians of the Galaxy for his crimes against the universe. 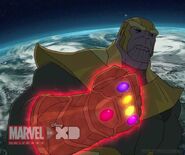